Teaching students to infer and formulate arguments can easily be in context of a novel.  Using Steinbeck's Of Mice & Men, students can analyze the text to create an outline for a mock trial for either George or Lennie.  The final project can be completed on paper, using word processing skills and completed using a student's BYOD device.

A student's smartphone or tablet does not have to just be used for a special occasion in the classroom. I encourage my students to use their device daily for note taking, recording ideas, reflecting, and researching. For this assignment, students will use their device throughout the process and to create the final products. 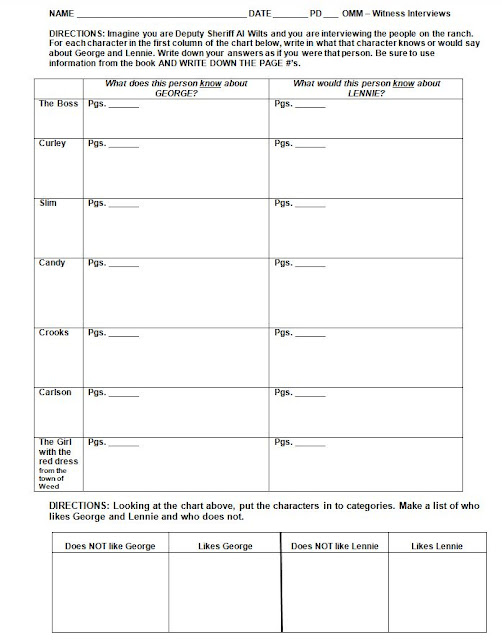 This project requires students to examine the story from various viewpoints and use textual evidence to support the perspective.  Students begin by collecting witness statements from ALL characters mentioned in the story:  The Boss, the various ranch hands and even the quickly mentioned Girl in the Red Dress. On paper, students would complete the chart and cite page numbers to reference statements. Students need to consider what each character knows and how their viewpoint is different from the reader's perspective.  Not all characters know all events.  After all witness statements have been collected, students would organize the characters into lists by who likes George or Lennie. 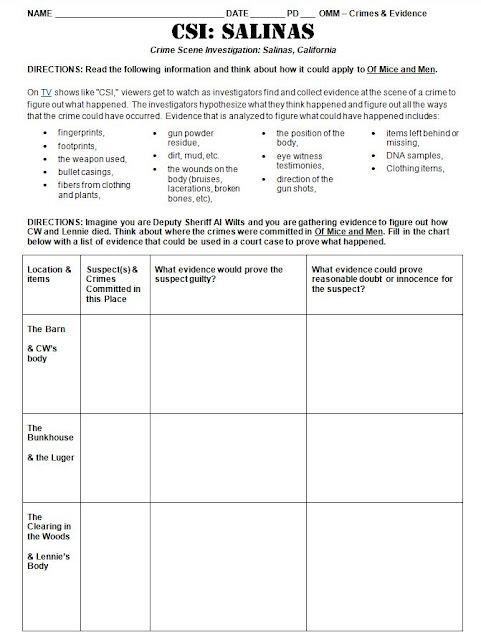 Students also need to examine the setting in various scenes to collect physical evidence that can be manipulated to support their case. The evidence can't be disregarded or changed, but it can be used to support viewpoints. This piece of the project is very important for students to formulate their arguments because there are certain things they cannot get around.  For example, (spoiler alert!) the cause of death for Lennie can't be changed. Students can't get around the location of the bullet wound and state that George was attacked by Lennie and shot him in a different spot. The self-defense angle for George will have to account for the ballistics evidence as shown in the story. Lennie never handles the luger so his finger prints cannot suddenly appear on the gun.

Additionally, students can manipulate the crime scene. For example, Curley's Wife dies in the barn, but the defense team for Lennie could state that she fell from the hayloft and died as a result of her injuries. The prosecution could refute this claim with the physical evidence of hay, fibers, puppy fur, etc found on Lennie's and Curley's Wife's clothing. We know from Crooks' statements that Curley's Wife is always in the barn, poking around where she shouldn't be and even threatens Crooks in Chapter 4. It is conceivable for the defense team that CW was in the barn, wearing her little red mules, and met with an accidental death. Although, the prosecution for Lennie's case should bring up the evidence of CW's smeared make up being on Lennie's hand (which readers know got there when he "reprimanded" her for yelling).

After witness testimonies and evidence have been collected, students need to decide which case and position they want to argue.  There are four possibilities: 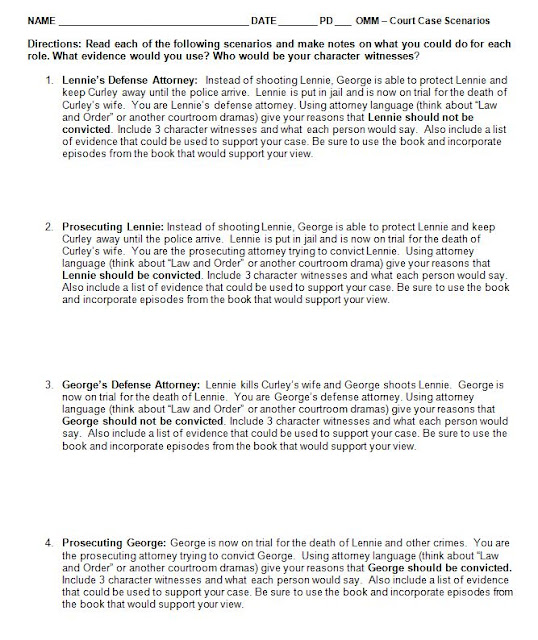 I tell the students that truth doesn't really exist; truth is just a bunch of people agreeing to see things the same way. The point of this project is in the process and the ability to support the case. I've watched enough CSI and Law & Order to know about circumstantial evidence and proving reasonable doubt, and I've done week-long mock trials in class where students are assigned roles, but there's always those few students who don't get into character and invalidate the activity. I've changed this over the years to just a persuasive-argumentative assignment to preserve the integrity and prevent the three-ring circus. The objective is to have the students examine all of the  evidence and witness statements prior to selecting a case, so that students will realize the best argument instead of picking a side and trying to support it and then start over when they realize they don't have enough evidence to support their position.

Prosecuting George for the death of Lennie is easy. There's enough evidence to prove that he did it between the lack of signs of a struggle, the ballistics evidence, and motive. George constantly belittles Lennie (as Candy overheard) and there's witnesses who can attest that George has been manipulating Lennie. The Boss will even state that George has been stealing Lennie's pay. Sympathetic readers will shout, "But Lennie can't take care of himself! George has to!" But all that matters is PERCEPTION: to a jury George can seem manipulative, controlling, and heck, with his new best friends, Slim & Candy, what does he need Lennie for?

Defending George is another viable option because he can be portrayed as a hero: the Girl in the Red Dress from the town of Weed will testify that George saved her life by beating that big lug over the head with a fence picket. Even the pugnacious Curley will state that is was George who pulled his hand from the clutches of Lennie's vice grip. But, there is that ballistics evidence to overcome: shooting someone in the back of the head usually isn't done in self-defense...

Defending Lennie is difficult. One could try the insanity plea, but throughout the novel, there are examples of Lennie knowing right from wrong, and there are are the numerous times where he threatens violence. Sympathetic readers will shout, "But Lennie only gets violent when the things he loves are threatened! He doesn't mean it!" But to a jury, the PERCEPTION is that Lennie is a menace to society who kills mice, puppies, and pretty women. Ouch.

We've all read enough school uniform essays to know that the easier side to choose is in support of uniforms, and school uniforms in this day and age is a dud topic. Students like reading OMM and that connection enhances this activity. They see George and Lennie as real people instead of some nebulous persuasive essay topic, which makes this activity so valuable.

Another valuable lesson is in organization: Once students have made a selection, they organize their information into an outline. To facilitate the process, students fill in the blanks on the provided template to create a rough draft and then use the draft to type up a final copy. 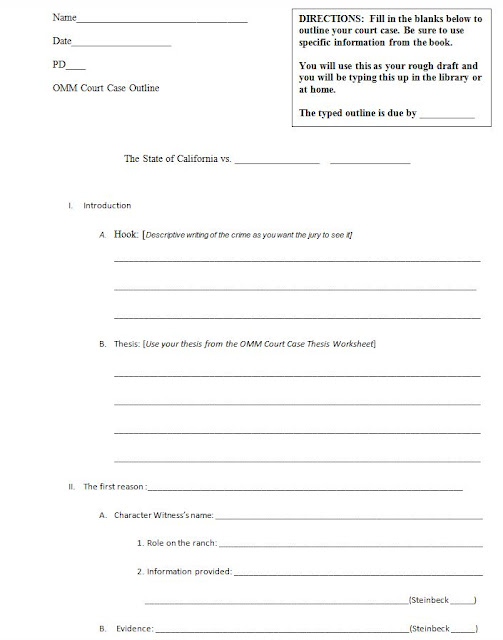 Students type up an outline for their case and is an individual grade assessing ability to follow directions, craft a legitimate argument and demonstrate understanding of outline format.  Students would peer edit each other's outlines using the provided checklist.

For the BYOD component and to make up for not doing an actual mock-trial, students would work in groups comprised of people with the same court case and position. Students would create a digital portfolio of crime scene photographs, videos of witness' testimonies, and/or scenes from the mock trial.  The final group portfolio would be posted on Edmodo and as part of their online participation grade, students would comment on each of the groups' portfolios. Students would complete self evaluation forms using a checklist and OSU rubric.

I don't have student examples created just yet because we start our OMM unit next week and this project is for the end of the unit, but I am recruiting former students to create some sample witness videos  They will be posted in the next few days.