Homework is an Oxymoron

Homework is an oxymoron.  Home and work are two separate places. Do I have plenty of work to do at home? Absolutely, things like laundry, dishes, cleaning.  I have plenty of home work to do... so why would I want to bring more work home?  And do I bring my work from home to school? Absolutely not!  That would be unprofessional, so why is it ok that work can infiltrate my home life?

As a parent, I have a new level of loathing for homework.  After being in a classroom all day, the last thing I want my girls to do is sit at the kitchen table working on homework.  I want them outside playing with their friends, climbing trees in the woods behind our house, riding bikes around the neighborhood... Actually my youngest daughter figured out that if she does her homework on the 30 minute bus-ride home, she won't have any work to do at home. Smart cookie! I do check it over, but rarely does she need to redo her buswork. She learned rather quickly to do it right on the bus or she would get stuck inside at home.

I want the same opportunity for my students.  After being confined to an uncomfortable desk for eight 43-minute periods, the last thing I want for my students is be stuck to a seat at home doing more work.

Homework for my students is finishing what they were not able to complete in class.  I make sure that students have plenty of time to complete their work in class, but not all students are studious in class, so they must bring some work home to finish.

Posted by Kate Baker at 8:41 PM No comments:

One Word: Vocab in Context Mystery

Earlier this week, I was asked on Voxer by California colleague Beth Oing if I knew what "oam" means in Book IV of Samuel Butler's translation of The Odyssey.   The understanding of the meaning of this one three letter word has sparked a journey of discovery spanning across various states and social media. 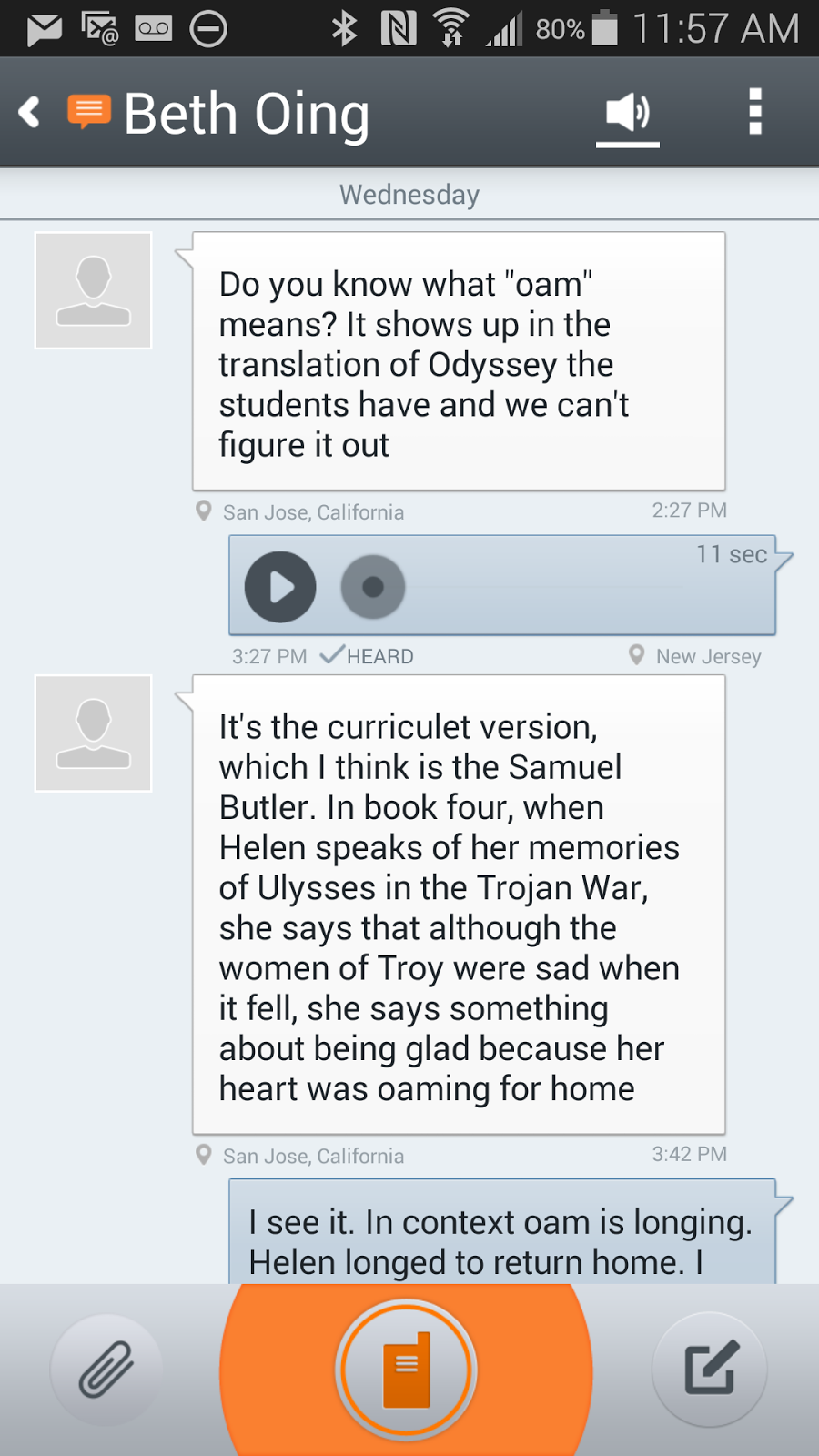 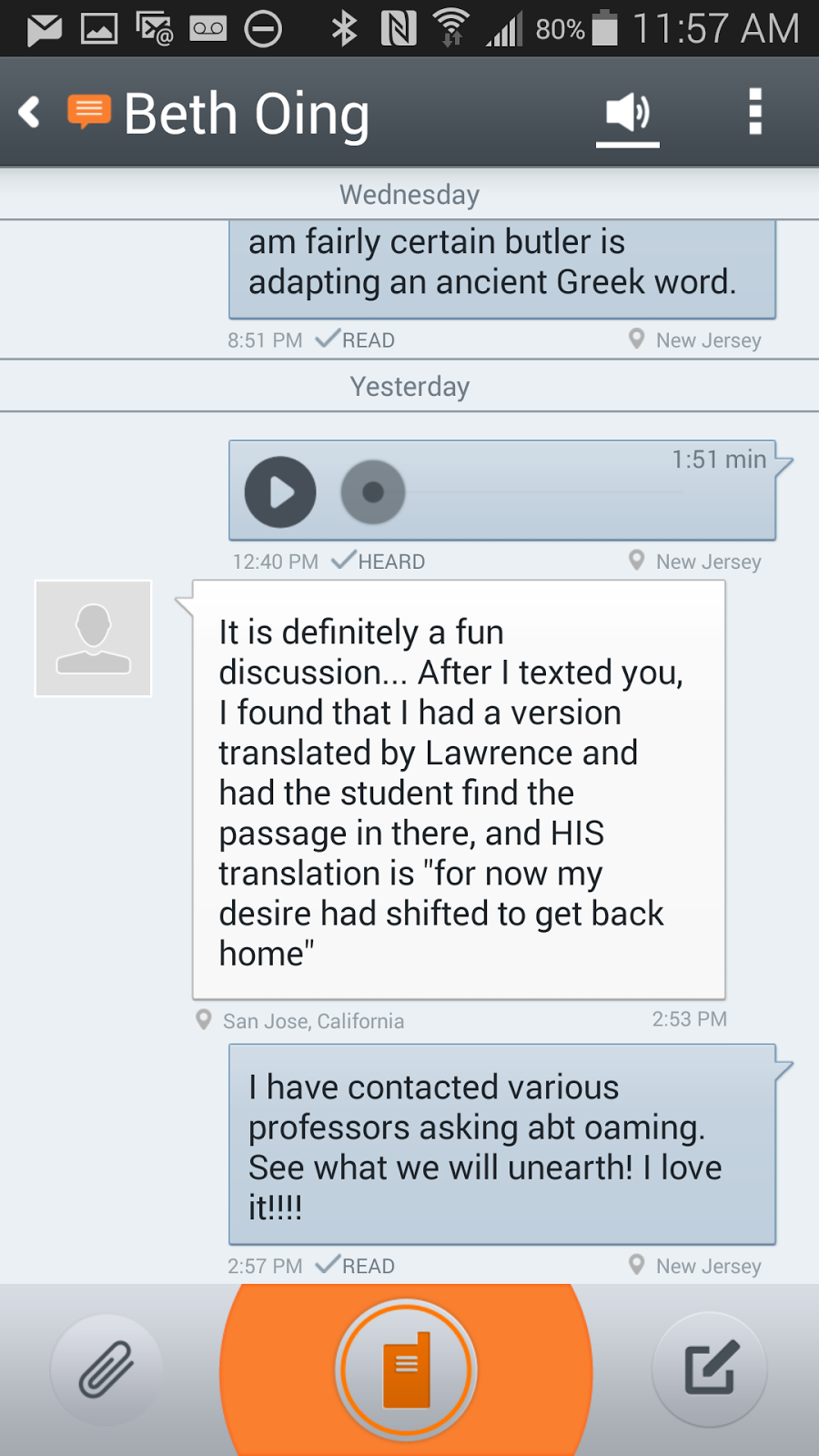 Here is the passage in question, as captured from The Internet Classics Archive:

In context, Helen is stating that during this time in the Trojan War she has begun to yearn or long for home.  But why didn't Butler just use the words "yearn" or "long"? There has to be a particular reason for that particular word. If readers understand "oam", will we see something more into Helen's character and mindset during this period?

Refiling through my Latin dictionary, I didn't recognize "oam" and assumed,  since I'm not versed in Greek, that "oam" must be some sort of play on words and Butler was using a Greek word as a pun. But why would there be a Greek word mixed in with the Latin names of Ulysses and Menelaus?  That didn't make sense either.

Carrying the conversation over to Twitter, I consulted 2014 Indiana State Teacher of the Year and Latin teacher Steve Perkins....


Thinking about diction and author's purpose, the literal English translation of the Greek as "her heart has turned to go toward home." By stating that Helen's heart had "turned" toward home, it implies that at one point she had turned away from home.  So the mystery of the Rape of Helen -- whether she went willingly with Paris or was forcibly kidnapped-- seems to have an answer in Homer: Helen wanted to go with Paris!  Could the word "oam" in Butler's translation signify this as well?  But then why didn't Butler use the literal translation? I love reading The Odyssey with my students for so many reasons, but being able to explore word choice in the various translations (Lattimore is still my favorite) and discuss how individual words can shape the meaning has taught my students that words do matter!

Still not satisfied, Steve then broached the topic with contacts via email and  his Latin educators group on Facebook.... 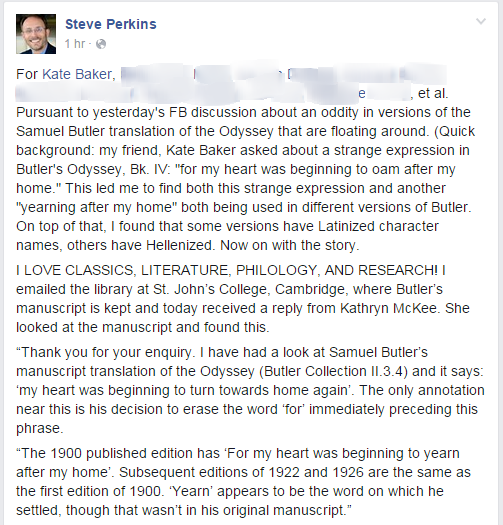 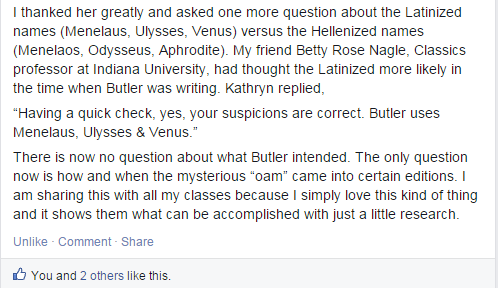 Did you catch that??? Steve's friend at Cambridge looked at THE Butler manuscripts. Talk about consulting the source!  This is like six degrees of separation-- with a few tweets, emails, and posts we were able to find a scholar with access to an original document to guide our understanding.  What else can we research?!


This has be such an engaging and fun use of modern social media to solve an ancient mystery. I echo Mr. Steve Perkins' sentiments!

I contacted the Classics professor at my local university, but we still haven't come upon an answer for oam.

I LOVE it when students are just as nerdy as I am.

Last year reading Homer's Odyssey and watching the 1997 made-for-TV movie starring Armand Assante, a trio of students were so intrigued (read: obssessed) with Odysseus' son Telemachus, that they tracked down the actor, Alan Stenson, who played him in the film, created fan club t-shirts (including one for me!), and shared pictures of the us wearing the shirts via social media, declaring themselves "Stensonites." 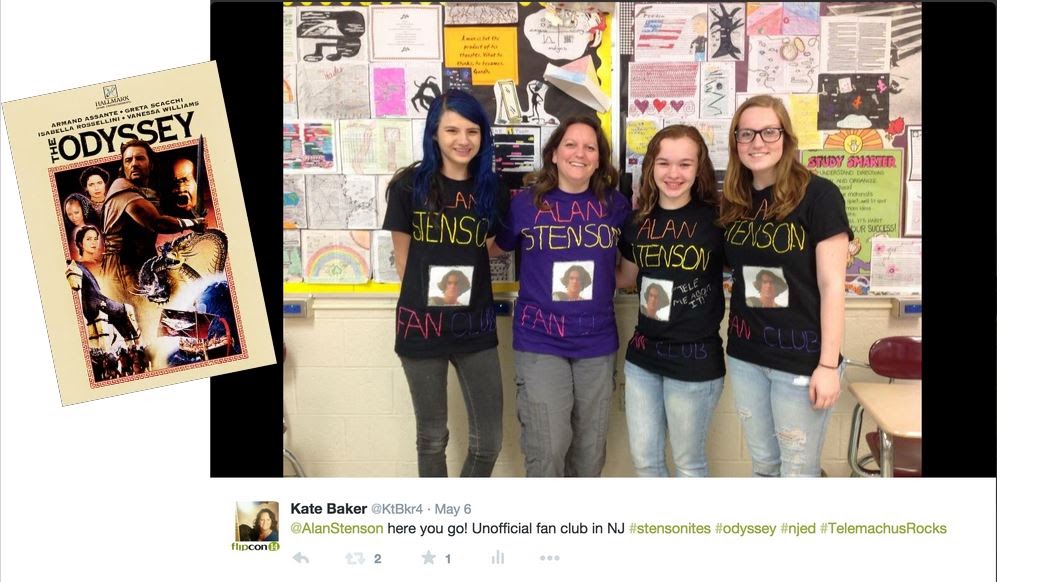 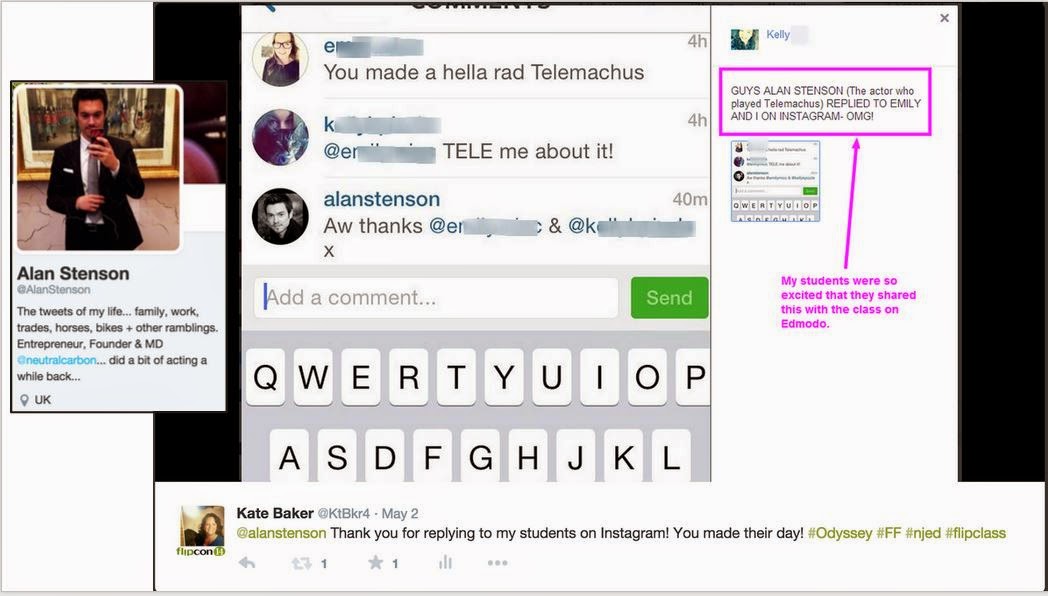 And if that wasn't enough, almost a year later on Valentine's Day, one of these same students sent me Telemachus themed valentines via Twitter and, of course, tweeted them to Mr. Stenson. 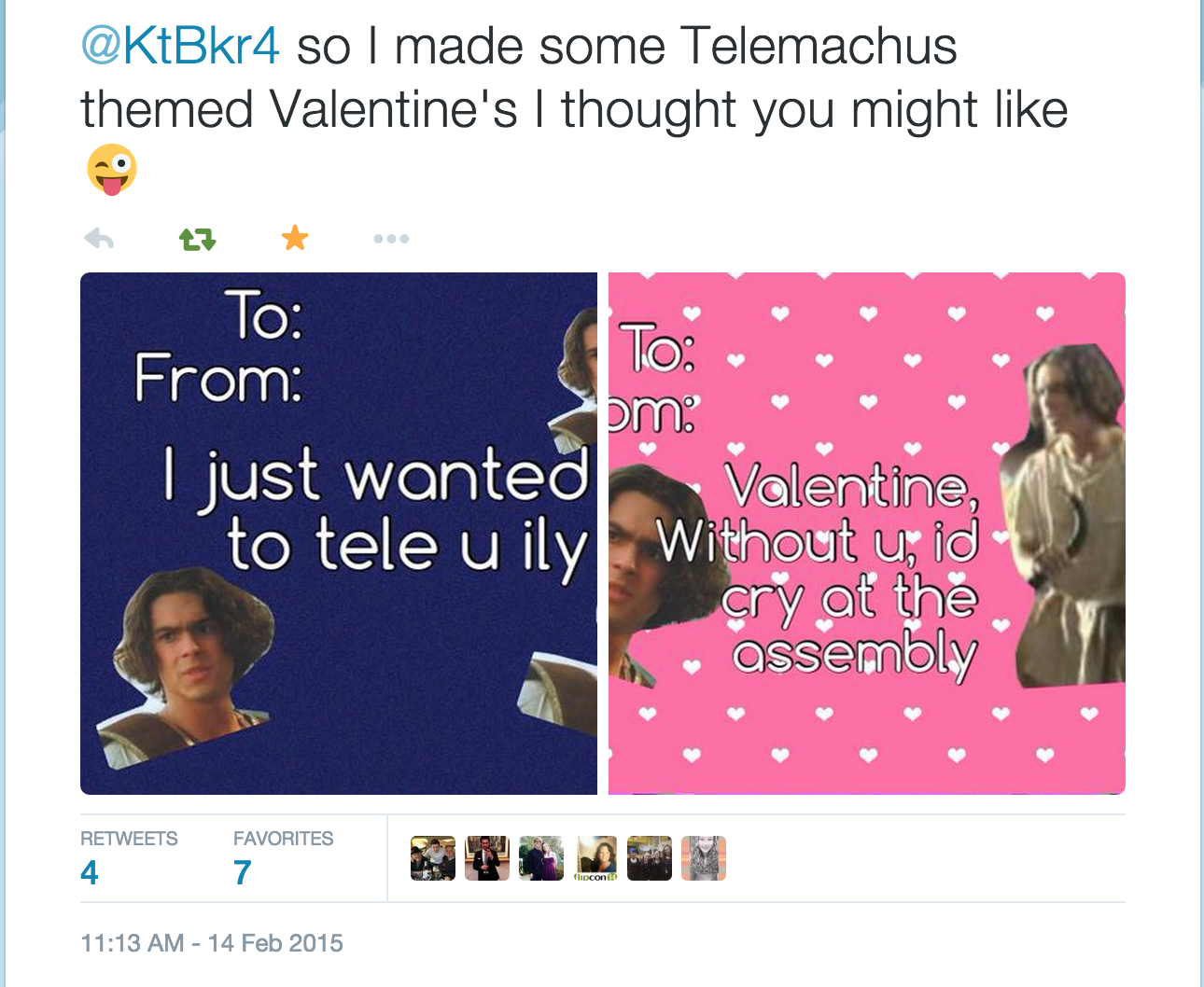 So here we are, April 17th, and this year's crop of students are reading/watching The Odyssey, and in honor of seeing Telemachus projected on the screen in my room, my wonderfully nerdy former students deemed today "Telemachus Appreciation Day."

My current senior students aren't as impressed with our nerdiness, but one joined the fun, tweeting...

So in honor of Telemachus Appreciation Day, we wore our shirts again...

Thank the gods, actor Alan Stenson is a good sport! 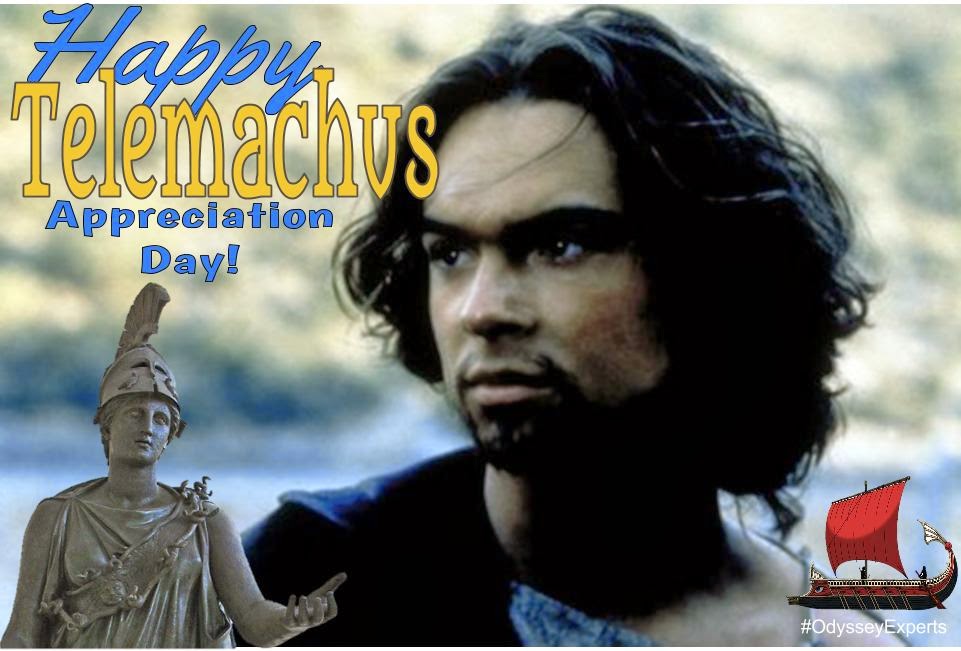