8 pARTS and Creative Writing with Research

Before I share today's 9th grade writing lesson with you all, I have to give a big, huge, ginormous SHOUT OUT to my edifying edu-buddy Cheryl Morris and the indomitable Jon Corippo. The evolution of this lesson and writing task begins with Corippo's 8 pARTS and Cheryl's sharing of her versions of said resources.


Here is a quick tour of Corippo's 8 pARTS: using imagery in art to teach grammar skills.


Great stuff, right?!
I think so too!

But, I'm a bit of a stickler for visual design and the layout of paper (dare I say the dreaded word) worksheets, I adapted Corippo's design and created my own template that included a space for the picture and grouped the parts of speech to designate relationships visually.


The talented Cheryl Morris created a rubric for the writing task, and I snagged this too, tweaking it for my class.

For our first repetition of this assignment a week ago, students focused on a picture that could relate to our reading of Richard Connell's "The Most Dangerous Game." The students wrote their paragraph on paper and I conferenced with each individual student, going over the worksheet and rubric and providing narrative feedback on the paragraph. Notice the rubric focuses on the application of grammar concepts, not necessarily the creativity of the writing. Don't worry, that will get added in later. At the end of each conference, students were told to write down a list of ideas for revision based on our conversation-- don't actually start revising (yet), just down a plan to revise.

After all conferences were complete (this took a few days), students were directed to revise and type their scene based on the picture, relying on their revision list. I told them at this point to stop thinking like students and to start thinking like authors: the picture was a starting point, now go in any direction that makes sense, as long as dialogue and description was included in the writing. Some wrote a continuation scene of "The Most Dangerous Game," others capitalized on the theme of the story and wrote a fanfiction piece using characters from the Hunger Games. To "publish" their work, students added the link to their Digital Writing Portfolio (more on that in another post!).

For our second repetition of the 8pARTS task, which took place today, I added a bit of a twist. See if you can spot it in today's agenda posted to our Edmodo class group: 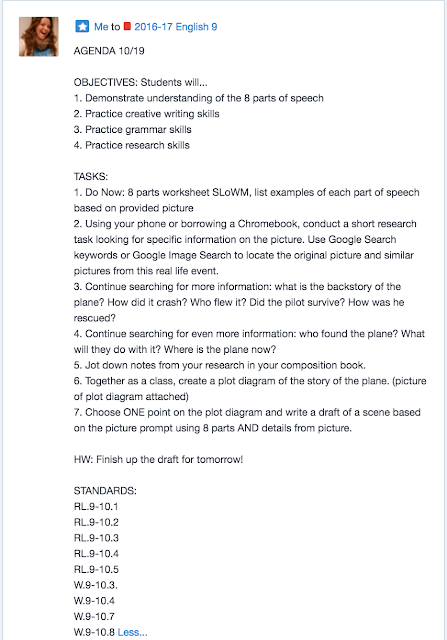 We started the task same as before: close read the image and jot down a list of examples of each part of speech in the picture -- a picture which was also a connection to our reading of James Thurber's "The Secret Life of Walter Mitty." 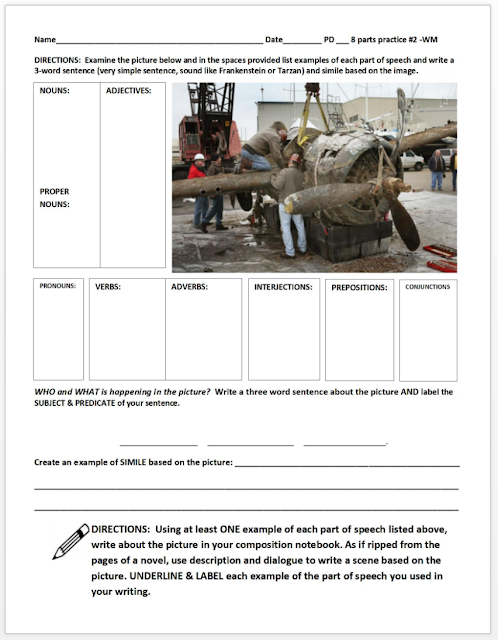 After our list was generated, I told the students this is a picture taken from real life, not a film, tv show, or one of Walter's daydreams, and I asked them what questions they had. Shouts of "How old is that plane?" "What kind of plane is that?"  "Did that come from the Bermuda Triangle?" "Is that Amelia Earhart's plane?" reverberated through the room.

I replied, "I don't know. How about we try and find out?"

(Ok, so I really did know some things about this plane, but I learned so much MORE during the next step.)

Students grabbed their phones or borrowed a Chromebook. They started typing in keywords to search; I showed a few how to do a reverse Google Image search.

And an amazing thing started to happen: around the room, I heard exclamations of "I found it!"

Students visited the sites and started shouting out information: the plane is a FM-2 Wildcat; it was in Lake Michigan; it crashed during a training mission.

AND THEN they started digging deeper: they found the name of the pilot, the name of the ship the plane took off from, the story of the crash, how long it was underwater, what happened to the pilot, how many other planes are in Lake Michigan, how this plane was found and recovered, and where the plane is now.

As they found the information, the students were directed to keep a running list of notes in their composition book.

By the way, this whole research phase took less than 10 minutes. I didn't hammer them on sources and citations (yet) of their information. For now, I wanted them excited about what they found. Don't worry, we will cite our sources later.

Calling the class back together, we compiled our quick research and created a plot diagram of the story of this plane: The FM-2 Wildcat flown by Ensign William Forbes from the deck of the USS Sable that had engine trouble during a training mission and crashed into Lake Michigan. Forbes was rescued, and after 70 years, the plane was recovered where it was later transported to an aviation museum in Florida. 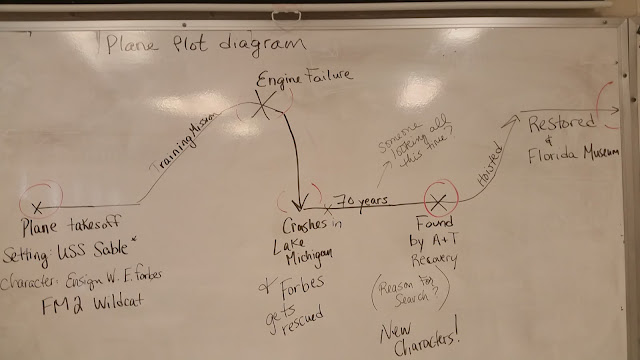 And now comes the final (almost) step to this task.  I told my students to pick one event on this plot diagram and write the scene of this event. As if ripped from the pages of a larger novel, write the scene with characters, setting, dialogue, description pulled from the research, and (oh yeah, can't forget these) underlined and labeled examples of the 8 parts of speech.

Tomorrow, as I walk around the room quickly scoring their worksheet and draft completion using the same rubric above, I'll offer some narrative feedback, and they will type up their handwritten draft in Google Docs, publishing it by adding the link to their doc to their Digital Writing Portfolio (more on that in another post!).

But seriously, I can't wait to read what they've written!

That in itself is a work of art.