Film & the Back Channel


My classes are wrapping up the year reading Shakespeare's Romeo and Juliet which includes viewing the 1968 Zeffirelli film version.  While the acting leaves much to be desired, there is merit in showing this version because it provides students with a view of the time period and it is used in various critical thinking activities.

We compare and contrast the cinematography of Zeffirelli's R&J (1968) with West Side Story (1961) in the opening brawl sequence--there really is no comparison, WSS is amazing-- and focus on how the filmmakers used the source material of Shakespeare's play, meeting Common Core Standard 9-10.9. Students point out similarities in camera shots and staging of the opening brawl sequence.  They notice the use of high angle shots to showcase the chaos of the fighting, as well as the use of close-up shots to highlight specific characters. They even recognized the actor who played Tybalt as the same one who played Basil Exposition in the Austin Powers series. 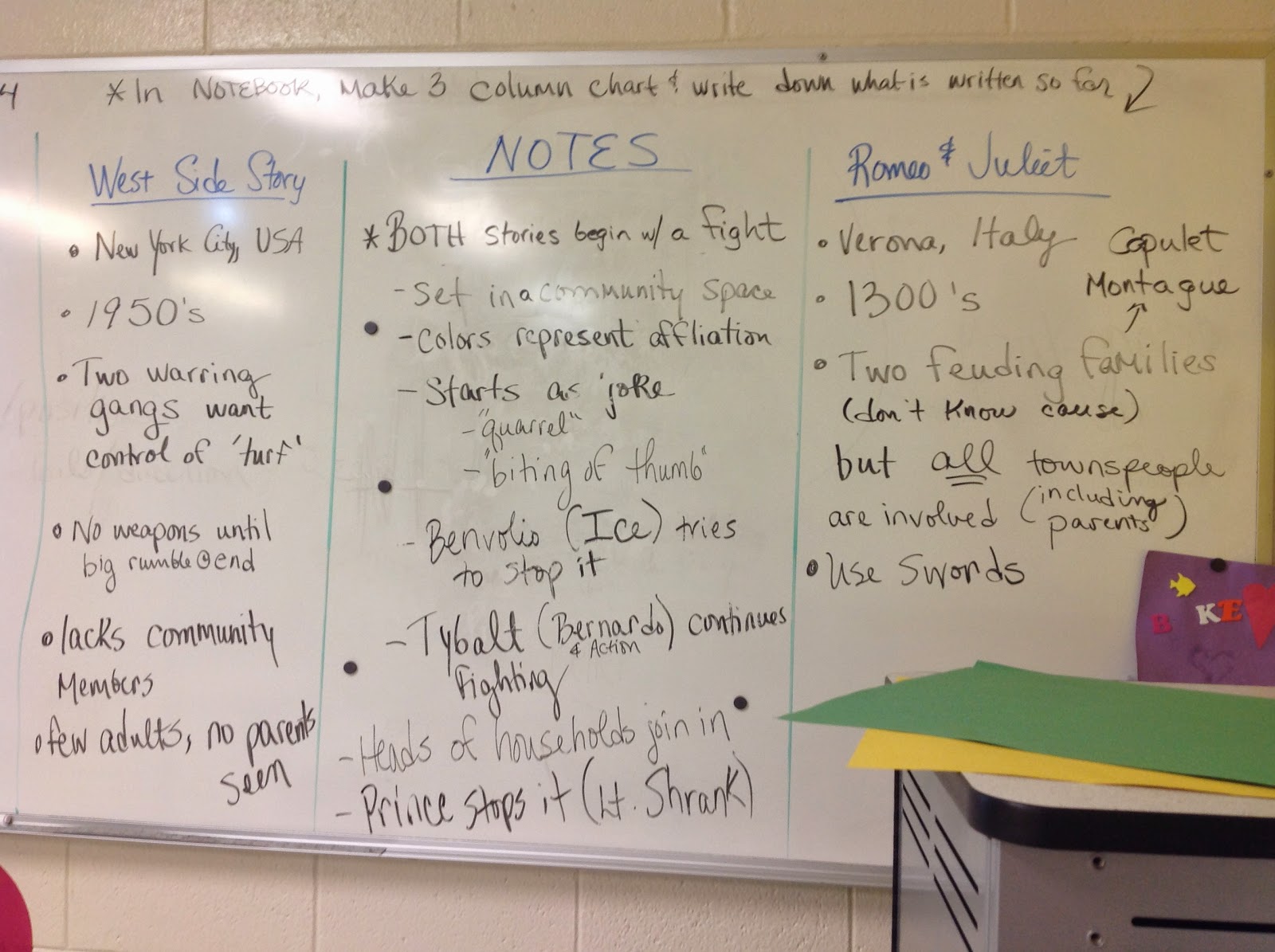 After the opening sequence and the Prince's yelling at all parities about having started another civil brawl, the next scenes in the 1968 film that correspond with Act I of the play are rather boring for modern teenage audiences.  Whereas I stopped and replayed all the scenes of WSS ad nausem to point out the cinematography and framing, I refuse to stop the 1968 version--like ripping off a band-aid, the quicker we view it, the quicker we will be done. To keep them enthralled, students participate in a class back channel discussion using TodaysMeet.com.

On our class set of Chromebooks, students join the TodaysMeet room that I created and I go over the ground rules for the period:
I don't follow a Q1/A1 format for posting questions during this activity, instead I post using all caps.  Since the conversation is very fast paced, I keep my caps-lock on for faster typing and so students can differentiate my questions and comments from the rest of the group. There is always a bit of silliness that occurs, but I remind the students about the purpose of this activity: to have a scholarly discussion.  There is a time and place for comedic conversations and blurt-out posting, but this is not it.

To archive each period's chat session, I make a quick screencast using Screencastomatic.  I turn off the microphone and record scrolling through the chat so that the video archive is about 5 minutes long, as opposed to a full 43 minute period.  After uploading the screencast directly to YouTube, I use YouTube's edit features and add music.  I then post each period's video to our Edmodo group where students can compare and contrast the conversations from the various periods.

Take a look at the archives from Friday's back channel discussion of the 1968 Zeffirelli version of Act 1, scenes 1-5 of Romeo and Juliet.

Posted by Kate Baker at 6:01 PM No comments:

I tried out the new Adobe Voice iPad app yesterday and made a video for my 9th grade students to view. In preparation for our Romeo and Juliet unit, we viewed and closely analyzed West Side Story. Keep in mind this is an English teacher's interpretation of film analysis.  We discuss mise-en-scene, composition, motifs, camera angles, types of shot, and the overall feel of the film.  I want my students to understand that artists make purposeful choices in the creation of their art and as an audience, if we look with an "informed eye" we can see the artists' intentions. Take a look and tell me what you think!


Adobe Voice is easy to use.  The tutorial guided me through the steps, recording my voice for each slide, selecting layouts, music, and themes.  It is limited on choices, but I can't complain because the price (FREE) more than makes up for the limited choices.  The templates that are available provide enough options to create a schnazzy final product.

I would like the ability to add more text to the slides, but the app is called Adobe VOICE, so the obvious emphasis is on speaking rather than reading.  As a workaround, I could save PPT slides as jpgs and upload the jpgs to Adobe Voice.  The caveat is that you run the risk of resorting back to the proverbial "death by PowerPoint" phenomena.  This is designed to be short, quick talking points--- granted my example above is on the long side, but I wanted my students to see and understand the progression that I presented. Keep in mind, the longer your presentation, the longer it takes to upload to the Adobe Voice site on the web. Sharing to social media or via email is easy, and once the presentation has been uploaded, you can grab the link or embed code.

Here are some tips:


Adobe Voice can be used by experienced and novice iPad users.  For those who are looking to creating presentations for a flipped classroom experience on their iPads or want students to create their own, this is an easy and versatile tool.