Guest post #7 is from Lotta Neumann, a teacher of Swedish and English language and language arts at Falkenbergs gymnasieskola in Falkenberg, Sweden, instructing 16-19 year old students. The school has been 1:1 since 2010, and Lotta is fortunate enough to be able to work with the finding and implementation of digital resources and best practices. Lotta has been using Edmodo since May 2012, and really appreciates "the global teachers' lounge" that Edmodo creates.


In Sweden Edmodo Con started at 4pm. I had already declined one party invitation and told my family that I would be indisposed during the evening.  I hadn’t really bothered to look at the program, partly because even if my English is good, I still find it hard coping with the special lingo from the various curricula. I have started to get my head around the British school system and think I might understand what the Common Core is, and Stibaly Johnson’s talk about how to use Edmodo definitely inspired me anyway.

The program seemed more airy than last year - there was time to make cups of coffee and my husband even managed to time dinner, not in the lunch break (that would have been at 10pm, Swedish time) but in between Patrick Fogarty and the Classroom Gymnastics. I missed the first couple of minutes of that and dropped in on the two very wise ladies Kate Baker and Liz Calderwood juggling the BOYD, blended learning and flipping, aided by Edmodo.

I never tweeted much, but these guys kept delivering one-liners that I’m considering printing and putting up on my office walls, and I wanted the few people that for some reason follow me to hear!

At about midnight, when Kevyn Klein did a brilliant run-through of my favourite Edmodo functions, I felt like it was time to call it a day, and a brilliant PD day it had been! I even said my thank yous and goodbyes in the backchannel group on Edmodo, and got some friendly waves back. But then I was just slightly curious about the Digital Citizenship talk, and got stuck in the interesting discussion. It got me thinking about how I could make use of the mentoring time when I get a new class this year...

Bijal Damani was amazingly inspiring! Her talk would restore the faith in humanity for most people; Yes, kids CAN do amazing things, and love to help others. Not every school may have the same support from the students’ parents, but we should certainly not hesitate to encourage and believe in the ability of young people to complete complex projects. And I was wide awake again.

Anna Davila’s thoughts on building leadership skills in the classroom was well in line with my own, and I found myself not nodding off, but nodding in agreement to everything she said. But now my contacts was really almost falling out of my eyes and I decisively closed my laptop, after saying good night.

Feeling I was missing out a bit, I crept into my bedroom, thinking about all the lovely people I had met and chatted with during the evening; learning so much and getting so much inspiration. I was already longing for the next EdmodoCon. And the participation badge....

And I had finally seen the point of Twitter!


Next year, I’m going to host a EdmodoCon party! With nibbles.


I connected with Lotta via Twitter during EdmodoCon, and, as you can see, good teaching and effective learning practices are universal, no matter the language spoken. 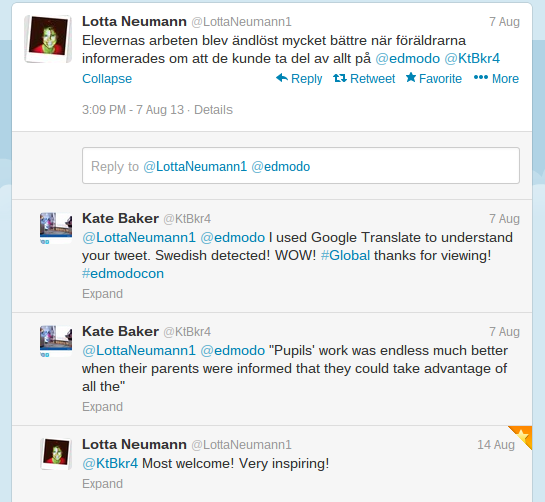 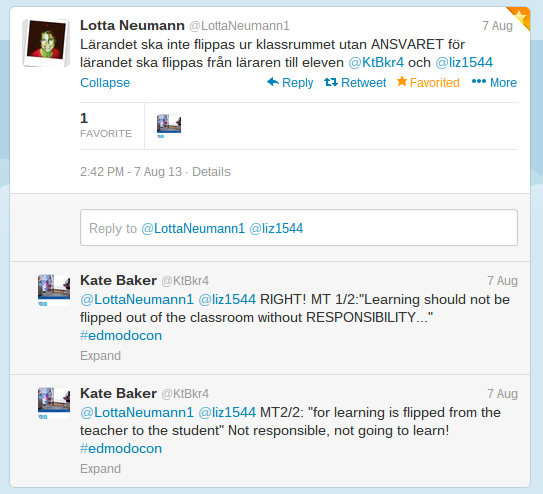