The Existentialism of Candy Crush

So, I've been playing a lot of Candy Crush lately.... yeah, that addicting Facebook game.... yup, that one... I know I shouldn't admit it, but... there is some relevancy. While I usually write about technology in the classroom, I think it's appropriate considering the events of the past two weeks to talk about how seemingly silly games serve an important purpose.

When I look at the design of it, each level is a little square puzzle, connected by a track,  and as each puzzle is solved, I then move on the track to the next level. Some levels are easier to pass than others and, I'll admit, there have been a few levels that I got stuck on. When faced with this "adversity,"  I could have given up.  I could have thrown my phone.  I could have researched cheat codes. I could have whined and cried,  lamenting my misfortune.  I could have paid for an upgrade.  Instead, I relied on the generosity of friends (ie. free lives and extra moves) and just kept persisting until I got to the next level, knowing that eventually I could beat it. 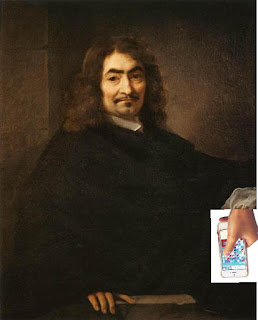 But isn't this what we do our own lives? When faced with the difficulty, we keep persisting and trying, accepting help from others, until we finally get through the moment and on to the next, and while I was using Candy Crush as a distraction for the moment, it helped to give me a break or some quiet "un-contemplation",  because I do not want to think about the moment I've just been in.  Descartes says, "I think, therefore I am;" I use Candy Crush to not think, so I can just be. After a few minutes break, I can get back into the real game of life.

This makes me wonder about students who persist in playing games in class on their device. What are their reasons for playing?  Do they need a break, too? Can they realize when it is time to put the game down and return on their own with out my harping? How can my classroom be a place where they do not need the distraction or break?
Posted by Kate Baker at 7:42 PM