It is Not a Project to Get Students Talking: Two Tools

Teaching 150 high school students, there are bound to be some who get lost in the crowd, lack confidence, or distracted by personal technology usage, but with the following tools and techniques, the quiet students can have their voices heard, the text-ers can be academically occupied, and all learners can be engaged by using technology that taps into students' behavior and aligns with Maslow's Hierarchy of Needs, Humanism, and  Social Learning Theories.

I really have to thank Cheryl Morris for introducing me to this simple tool last summer and providing me with ideas that I've put into action this school year.  TodaysMeet.com is a website that allows a person to create a closed chatroom that only those with the URL can join.  A la Twitter with it's 140 characters per message, the teacher creates the name of the room and provides the students with the URL address. Students type in the URL in their web browser and enter their names in to join the room. The chatroom or backchannel can be accessed on a computer, tablet, or smartphone, and puts students' texting talents to work.

Caveat: Expect some shenanigans the first time using the backchannel as students move through Maslow's Heirarchy of Needs and engage in social learning and digital citizenship. I've had students enter false names and type ridiculous messages, but once they get settled, they can move from the realm of ridiculousness, needing the attention of others, enter the sphere of learning to understand and engage with the content, and finally, make connections with other students in a self actualized and transcendent manner.

To allow students to revisit the conversation as needed, download and save the transcript and then upload it to Edmodo or other LMS, or email a copy to all participants. Students can also save their own copy of the transcript directly from the site. Here is a transcript of a Socratic Seminar on Steinbeck's Of Mice and Men.


As seen in the transcript of December's Socratic Seminar on Steinbeck, students practiced interpersonal, listening, and critical thinking skills.  As they became vested in the activity,  the students were quick to point out those who dominated the conversation and others who provided thoughtful responses.  The entire conversation was student-centered, and all I had to do was monitor and provide guidance as needed.


During our viewing this week of the first 30 minutess of The Odyssey staring Armand Assante, I posted questions to the TodaysMeet chat room, as well as gave them a handout with the questions printed. Since this was the first time using TodaysMeet during a film, I scaffolded the process and anchored the new activity with something familiar.

During my pd 7 class, one of my "deskflowers" (like a wallflower, but sitting in a desk, of course) bloomed for all to see, providing intelligent comments and smart answers to the questions I posed and was recognized by another student for her contributions. Despite the typos, this was the first time Nikki really heard Alyssa "speak" in class and Alyssa was recognized for participation in class. Pretty darn cool, especially if you knew Alyssa's back story. 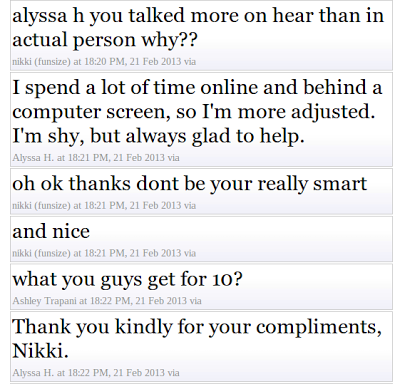 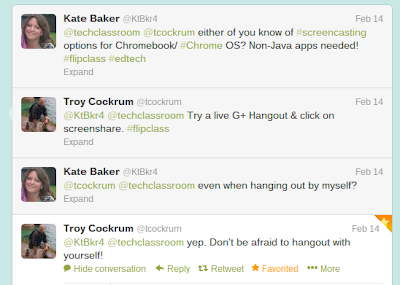 One of my go-to Google guys, Troy Cockrum, told me to not be afraid to Hangout by myself, and he was right. And my ELA-flip-coach Cheryl Morris, who I have mentioned here so much that I should just rename this blog "Putting Cheryl's EduAwesome Ideas Into Practice," provided me with the opportunity to do just that.  Working with Cheryl and the other #CoLab flippers from the Flipped Learning Journal on a series of video discussions of John Green's The Fault in Our Stars, I snatched up the opportunity to record a discussion with a quiet student who wows me with her nerdfighter prowess and a video with another student who's own life connected with the characters in Green's novel.

Gabbie won't speak up in a room of her classmates, but after school on Friday, we recorded an 11 minute conversation using On Air Google Hangout where she couldn't stop talking about the author and all she knew about the story. Using the Google effects as an ice-breaker while we filmed and simultaneously projected the video on the front screen (as well as live posting to YouTube), Gabbie was able to face her fear of "public" speaking.  With more practice, hopefully Gabbie will realize just how valuable her contributions can be and that she should not hide in a crowd.

On Saturday, I had the pleasure of chatting with my former student Steven about Chapter 2 of The Fault in Our Stars and his own experience with cancer.  Again, this wasn't for a grade, but to show how fictional stories resonate in own lives and to give one student the opportunity to share his story with others.

You may have noticed that the style of the video differs despite using the same tool.  For Gabbie's video, I opened a Live, On Air Google Hangout with no other participants and flipped my web camera around to capture us sitting in the desks. We were technically hanging out by ourselves online, and Gabbie's buddy, Amber, played cameraman by changing the effects and starting/stopping the broadcast. For Steven's video, we did a regular Live, On Air Google Hangout and chatted back and forth for 15 mins, then with a little editing magic using Camtasia, Cheryl inserted titles and cut the conversation to 6 minutes for me (Thank you, again!). Google Hangout is a useful tool that I am just beginning to realize its applications in and out of the classroom, and I have just barely begun to delve into the world of video editing. Oh, what I want to learn to do!

Coincidentally, if you are interested in getting in on the discussion, The Atlantic is doing an organized Twitter chat on The Fault in Our Stars and you can view the rest of the Flipped Learning Journal's book discussion videos on YouTube.

Why do they work?

Both TodaysMeet and Google Hangout appeal to visual and kinesthetic learners and social learning proponents.   The visual learners can see the conversation in the backchannel, as well as see the movie like nature of the Google Hangout when not actively participating in the video.  Kinesthetic learners are busy exercising their fingers when using TodaysMeet, and, as an active participant in a Google Hangout, the learner is a movie star whether it be on a desktop computer, laptop, tablet, or smartphone. The students work collaboratively to understand the material and practice interpersonal skills.

The longevity of both of these tools in found in what they provide at no cost to users whether in the classroom or not. Both allow for synchronous communication no matter the location or context of the participants. Todaysmeet can be used during business meetings/presentations-- just imagine Mad Men (if they had computers or smartphones) backchanneling during a pitch!-- and, while I like the serendipity of Twitter and opening the chat to the world wide web,  since schools and/or businesses many need closed and secure communication, TodaysMeet is a more viable option than chatting using Twitter. With archiving using YouTube, Google Hangouts allow for a variety of connections, including hanging out with President Obama. Politics aside, if the President uses Google Hangout as a modern version of Roosevelt's Fireside Chats, then why not apply this tool in the classroom?

By using technology that appeals to student behaviors and needs, we can give all students a voice and opportunity to be in the spotlight.